After our 9 days in North Conway – Santa’s Village, Part 1 & Part 2 – we headed back to  Maine only this time towards Boothbay Harbor area where we’d stay for the next few nights.  Read about our previous days in Maine in Old Orchard Beach here.

Growing up in Boston, I’ve always LOVED going up to coastal Maine – especially in the summer.  Lighthouses, sea glass hunting, clapboard houses, hydrangeas in full bloom, adirondack chairs, fishing harbors, fresh lobsters & clam chowder – you get the picture.  If not, you are really missing out and it is making me want to visit Maine now! As we drove from the White Mountains to our hotel in East Boothbay, we first stopped off for lunch at an old familiar spot Five Islands Lobster Co in Georgetown. 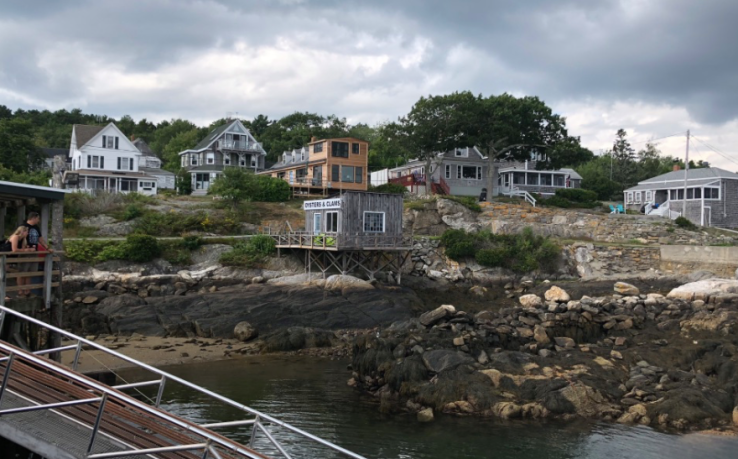 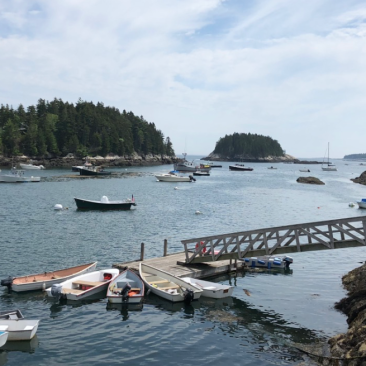 I had to order a lobster roll without mayo – and it was soooo good!  We made a point to eat lobsters and oysters a lot during this trip! 🙂

Afterwards, we stopped off at a private beach nearby to play a bit in the rock pools and enjoy the fresh air and scenery.   We know a family from Boston, who owns a house there, so we figured we’d be okay for a short visit – it was fine! 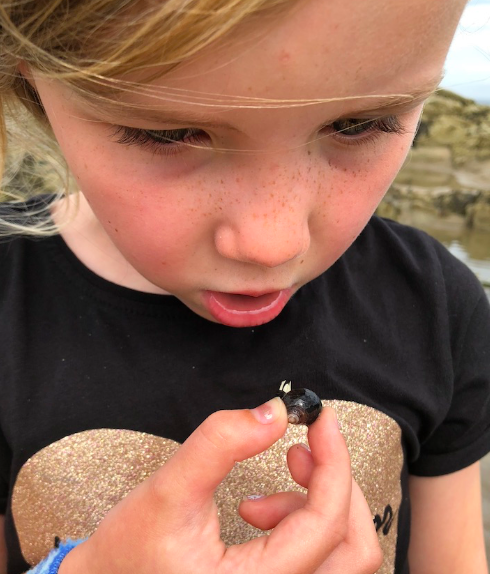 It was this beach where the brand new New England Patriots hat and sunglasses were left behind and by the time it was realized, it was too late to go back.  Maine traffic in the summer is brutal and it was just not worth it.  If we had a boat it would be easy.  So if the tide didn’t take it out, someone has a brand new hat and sunglasses!

We booked 3 nights at Smugglers Cove Inn – East Boothbay Harbor – and it was a nice time and it was a very family-friendly hotel.  We had a simple room in the Anchor building – ground floor so we were looking out towards the pool and then the small beach and sunset.  The location was perfect for us to use as a base for exploring the area.  As with all our hotels, we made sure that the hotel had a pool which the kids ended up using a lot. 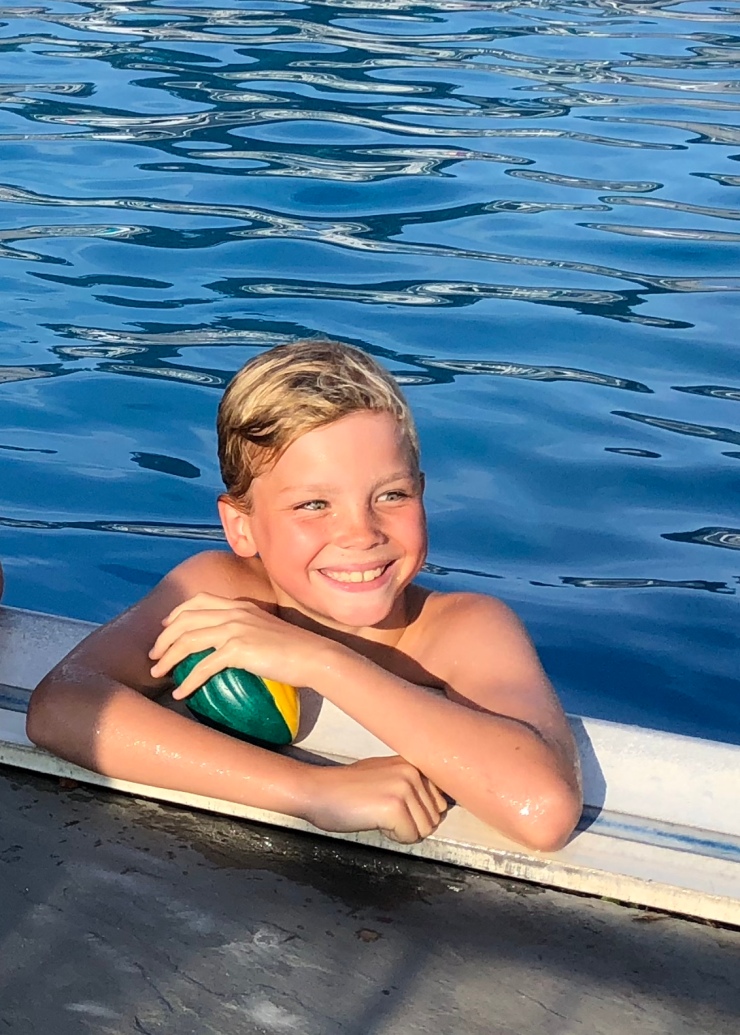 There was a small, private beach with kayaks and canoes which you could check out from the office.  Nils and the kids did that for about 20 minutes – while I laughed on shore and took photos.  It was really funny to watch from shore! 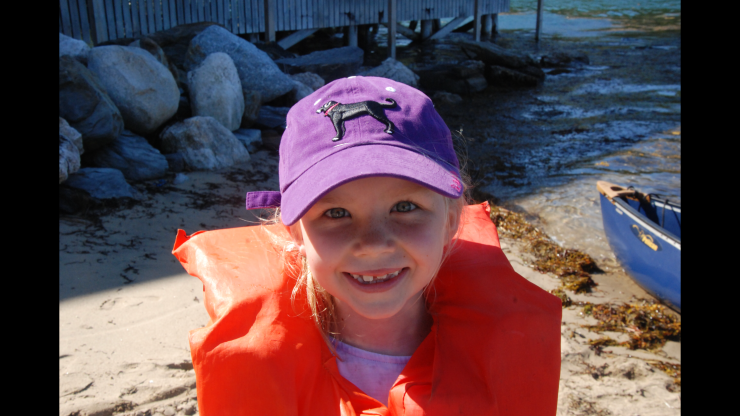 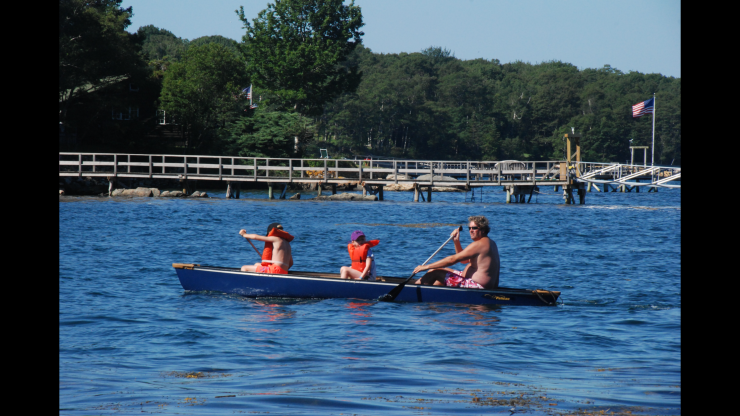 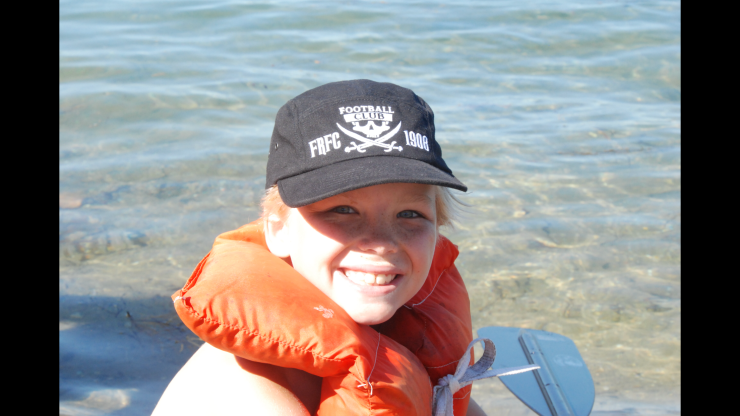 One night we had a couple drinks in the 1820 House restaurant as we didn’t want to go out we had the kids have dinner there.   In looking back at my photos – I did have a lovely looking Bloody Mary 🙂 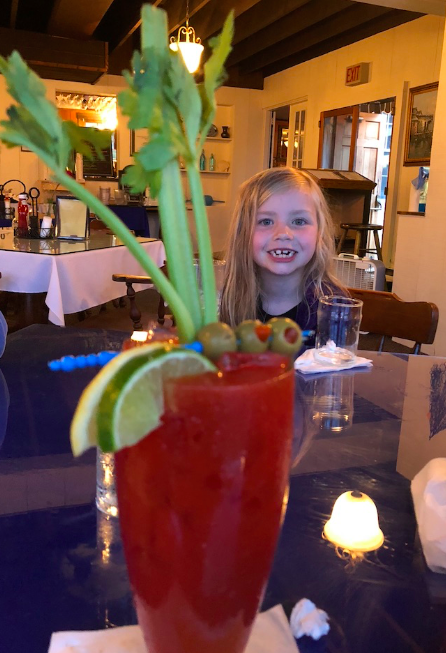 They serve a small buffet breakfast in the dining area each morning but the coffee was terrible – it needs to be improved  – it was so weak!   The head chef was very personable and friendly.  He was from Philly but lived in the Caribbean for some years – nice guy! 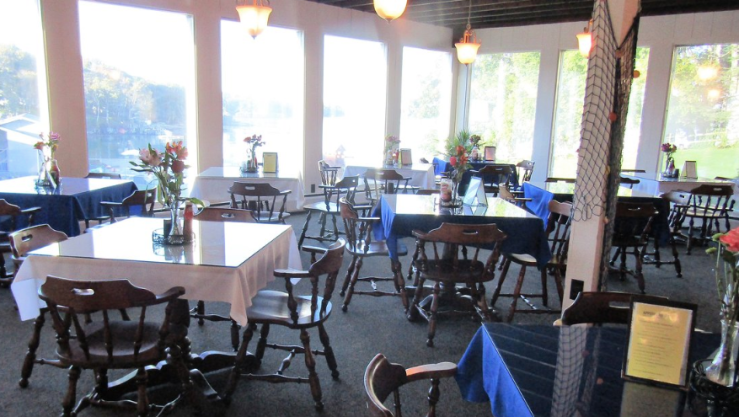 One day we drove over to Pemaquaid Beach and the kids and Nils went into the water for a swim.  A bit too cold for me 🙂 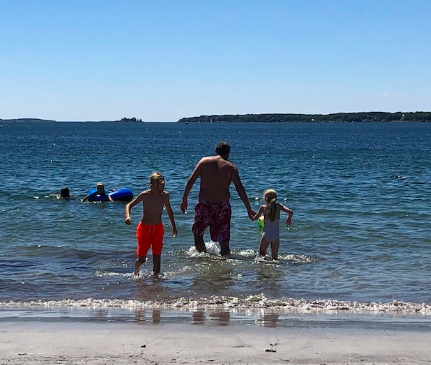 It’s a nice, clean beach and I would definitely go back another time.   Daily Entry Fee: $4.00 per person per day, cash only (children under 11 are free)

After our adventure at the beach, which truthfully didn’t last that long. How would it,  we only had towels?  No beach blanket, no cooler, no umbrella – no lunches or snacks.  We set off to have lunch but were specifically looking for New Harbor.  I bought two sketches at a charity shop and thought they were so pretty – after some research we discovered it was a place in Maine called New Harbor.  So we thought we’d go find it one day and have lunch there. 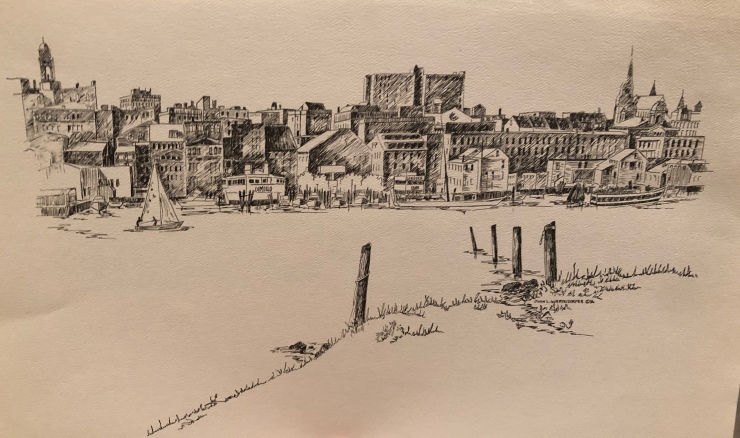 To our pleasant surprise, there was Shaw’s Fish & Lobster Wharf – a simple seafood restaurant with an open deck looking out over a small fishing harbor.  I love this type of place – so easy going, laid back…   very New England. 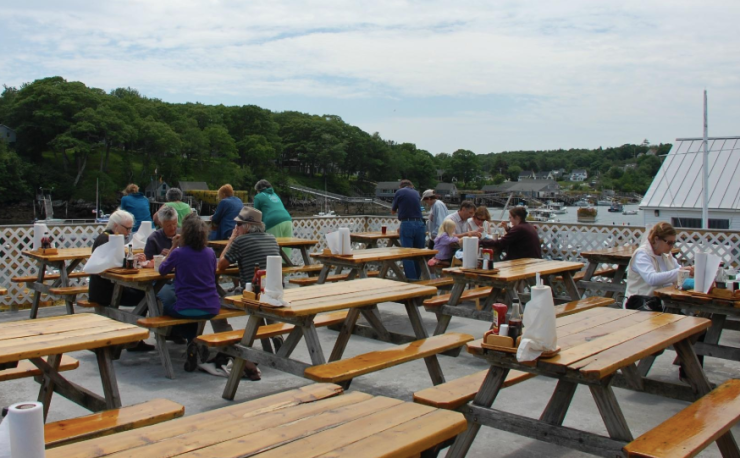 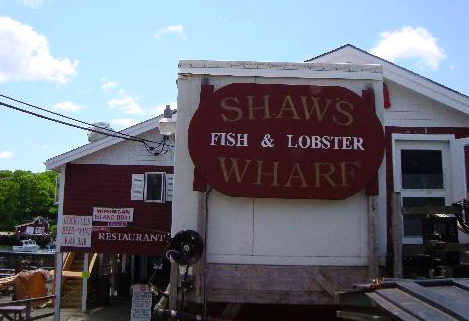 Downstairs there was an oyster bar which didn’t open until 2 pm, so we hung around a bit longer to be sure Soren and I could have a dozen oysters and I had a frozen margarita.  It was fine – they were fresh oysters so that was good but the woman working – well she needs a retraining session on a few things.

1) Get a frigging PERSONALITY and know what customer service is about – it was as if we were bothering her ordering drinks and oysters.  Don’t work at a bar in peak tourist seasons in coastal Maine if you don’t want to deal with tourists.

Like this guy – apart from me, he’s the biggest oyster fan I know 🙂 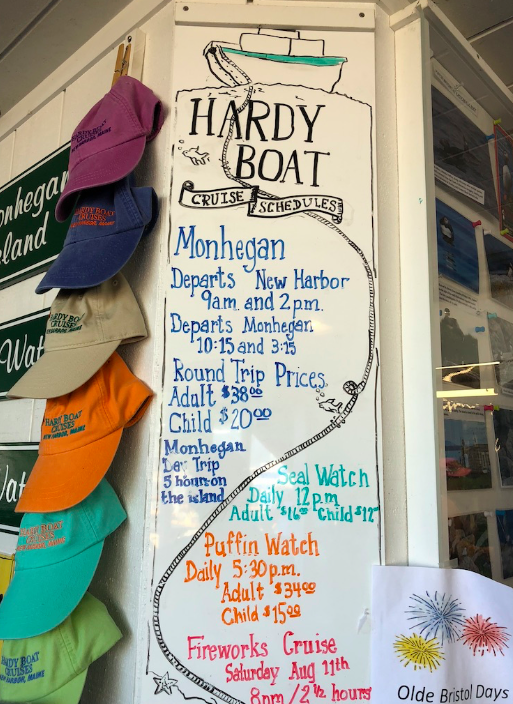 It is from this pier where you can take various Hardy Boat cruises – I couldn’t talk anyone to going on a cruise.  Also in the movie – Message in a Bottle, the fog-bound harbor near the end is New Harbor, Maine.

The next day, we decided to spend the day walking around Boothbay Harbor.  We visited some stores to find some t-shirts for Nils.  They have these shops where you can get 4 t-shirts for $20. and he did – nice ones.  One read – Boothbay Harbor – a Fishing Harbor with a drinking problem.

I had to take a photo of this cool machine located in one of the shops – it’s an old fashioned mailbox.   How cool would this be in your home or office?! 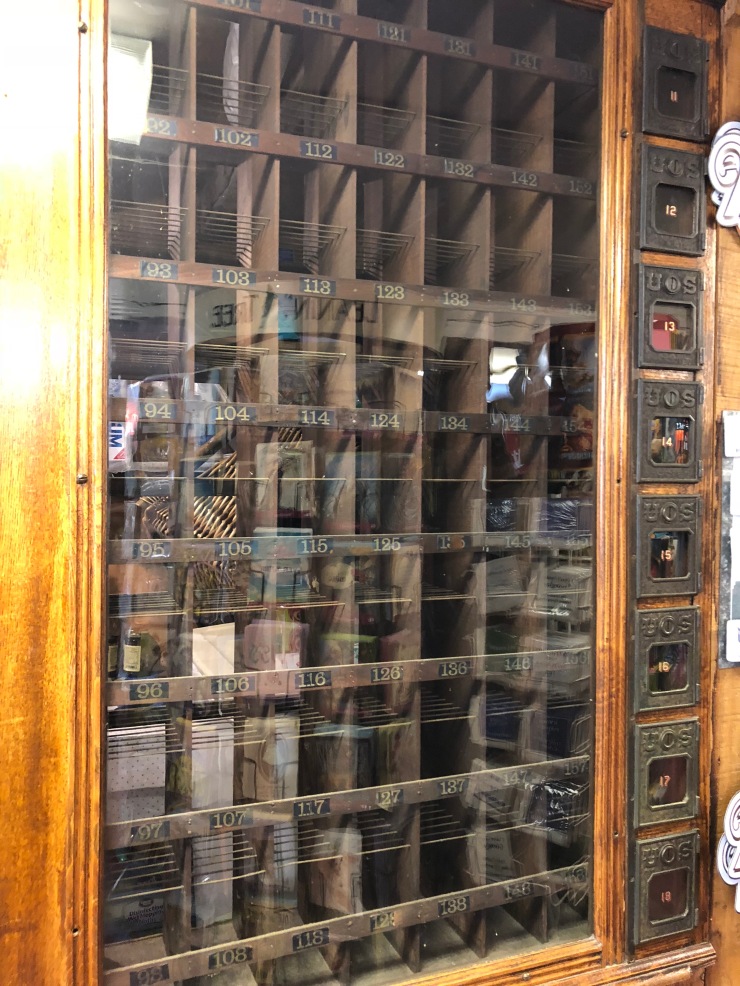 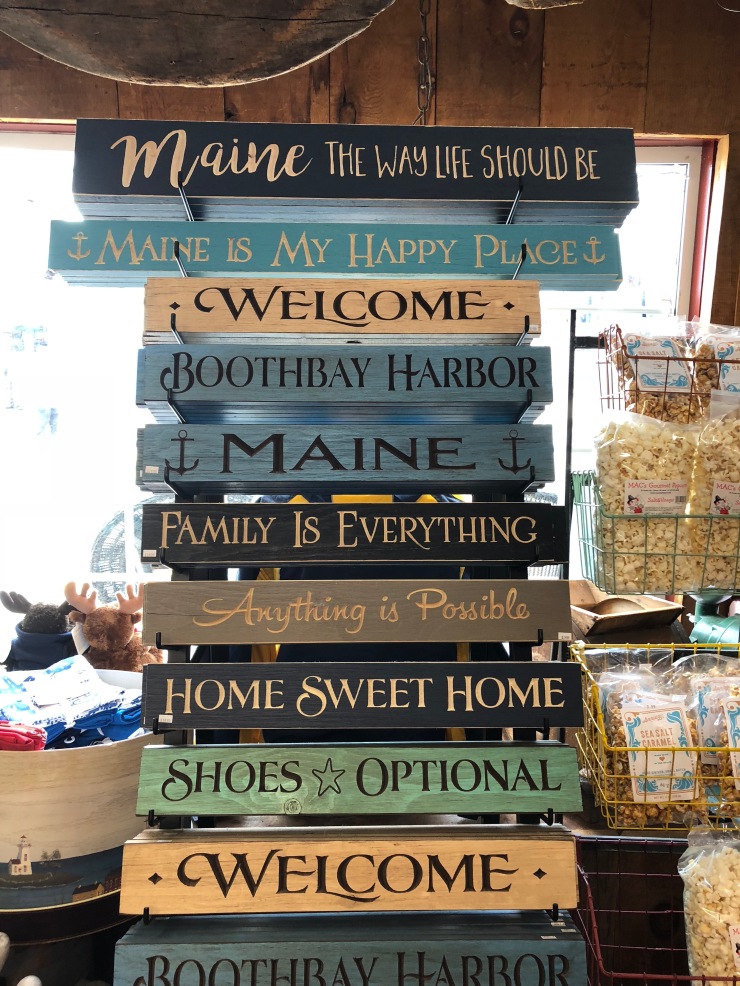 Along the main street is Downeast Candies & Fudge Factory where the kids could see the man making the taffy and then of course, we had to buy a bit of fudge!

My sister, her husband and dogs came up to Boothbay for lunch and a walk and we took this photo in front of the famous 1000 foot bridge.  They have since moved away from Maine to South Carolina so was lucky to have this moment.

We popped into the Wicked Whoopie Pie store but we didn’t buy anything…. as it was preferred to have an ice cream instead at the Downeast Ice Cream Factory. We had a great three night stay up in Maine but now it’s time to head to Boston for some days before we head back to the Netherlands!

I am an American now living in the Netherlands. I enjoy snapping photos and blogging about our family’s journey since we moved abroad nearly 8 years ago. We moved from Boston to the "big skies" of coastal North Norfolk, UK. Then onto Dublin, Ireland, and now we're here in the Netherlands. When I started my blog, it was a way to capture memories of the kids. THEIR love of mayonnaise, my love of photography, DIY, crafting, Pinterest creations, sea glass hunting, exploring & enjoying life with our two amazing kids - all while trying to remain sane. Please note that content, photographs, and images on this site are my own unless otherwise stated.  Pretty please do not repost without my permission. Questions?  Comments?  Ideas?  Winning lottery tickets or riches you'd like to share? Please contact me ;)