As I was planning on taking the kids to America for a month in early April, we had to renew Soren’s American passport as it expired when he turned 5 (he’s now 6!).  We’ve just used his Dutch passports for travel and thought that we’d be able to travel back and forth on that, but was wrong.  If you are a US Citizen, you must show a valid passport to enter the US.  After spending well over $2,600 for our three tickets, no way would I take that risk.

As we had to go to the US Embassy in London for the appointment, then they’d send all the paperwork to America, we booked the first one available which was Thursday, February 6th.  Knowing that it may take a long time to get the passport as it is processed in America, we sort of panicked that we’d not receive it back in time.  Coincidentally the date of February 6, was Soren’s original due date and the date which my Grandma passed away.  As the appointment was 9 am, we knew it would be hard to get there from North Norfolk and would have to go in the night before via train.

The train ride started off fine, where we had four seats at a table with snacks, beer for Nils, and a card game for the kids. 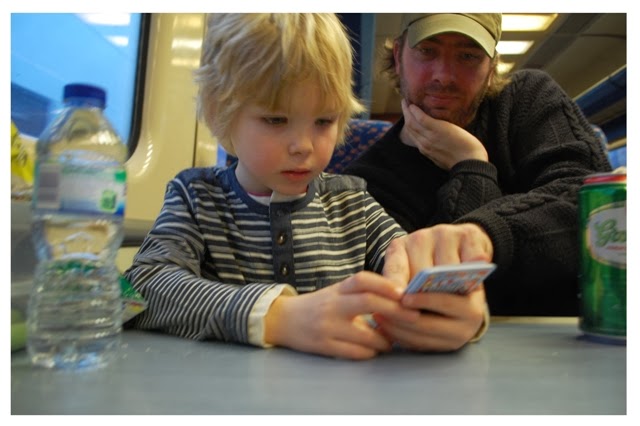 When thee train stopped in Ipswich and told us we’d have to all get off the train.   Apparently there was a tree on the track in some place on the way to London and that this train was now going back to Norwich. Totally annoying, we had to wait about 45 minutes on the side of the track for word as to when it would be removed and then we could go on our journey.  Long story short, we finally made it to Liverpool Street Station … from there we walked by Soren’s favorite skyscraper building in the City of London, St. Mary Axe aka “the Gherkin“.

Then on towards The Tower Bridge which is really such a pretty bridge. Many years ago we stayed at the Tower Hotel right next to it. 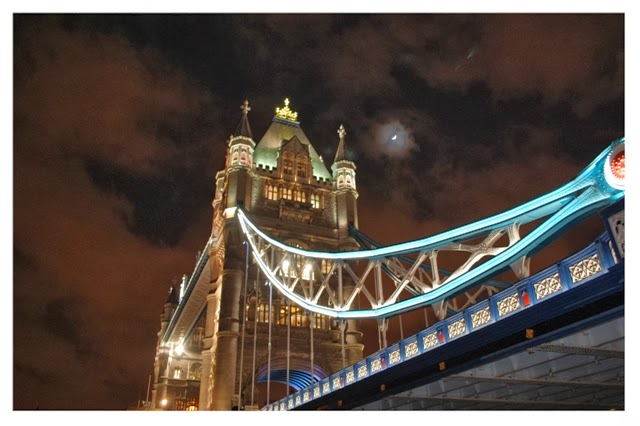 Finally, we had a quick meal in the Dickens Inn at Nils’ request for old time sake.  To me the food was nothing special really.  Truthfully I would have preferred a nice neighborhood bistro pub by our hotel – but went along with it.

We found a very basic – no thrills hotel as close as possible, so we booked a family room in the Marble Arch Inn for 115 pounds.  When I say no frills, it was just that… but it was in a perfect location in Mayfair – very convenient for the morning appointment. The staff was friendly and helpful and the room was big enough for all of us.

But the crappiest hotel shower ever!  While with a lot of pressure, it was just a small triangle in the corner with a fabric shower curtain and no edge on the floor of the bathroom, so, of course, the water was everywhere.  The family rooms are located one flight down with a small window facing the street.  As I’m now so used to the quiet countryside, I had such trouble sleeping. Every person walking by, every siren, every car which drove by kept me up.  Worst night sleep I think it my life! Maebh woke up screaming holding her ear and was not able to be consoled – turned out two days later her ear tube fell out and she had a bad ear infection.

After a breakfast at the Marriott near the US Embassy, we headed over to the appointment.  Know that you could not bring any electronic items (phones or cameras) with you, we left our bags with the hotel staff – which was perfect. After going through enormous security screenings, which was to be expected, the appointment itself was rather painless.  They had a small play area for the kids with toys where Soren & Maebh found some fellow American friends.   As his first passport photo was him at 6 weeks, we needed to bring two photos of Soren each year leading up to today.  That was easy, I just printed off things from my blog, but we brought along his valid Dutch passport which we renewed before we moved to the UK.  It was funny at the end of the appointment, the guy said to Soren I just need to ask you one question – is that you?! On February 22nd, his passport arrived via courier, so we have no passport worries now.

We took advantage of having some time after the appointment but before our train home, we did some tourist walking around London.  The problem, however, was that most of the Underground was on flipping STRIKE!  There were a few lines still running so we were able to get across town a bit… a few bus rides and a taxi mixed in we were all around the city for a few hours.  But it started to pour rain and it was full on for hours, so I didn’t get many photos.

Just as the Gherkin is Soren’s favorite building in London, we got to see Maebhs which is BIG BEN! When I took her into a souvenir shop to see what they had for umbrellas it was that bad, she chose a Big Ben pencil sharpener.   Yes, she know it and points it out everywhere she sees it, so it was perfect that we came out of Westminster and there it was above her.

There was one other thing I really wanted to do when we were in London.  It was to eat SUSHI! Knowing that apart from the place in Norwich, we’d not have this chance for a while, so we did.  We went up the Heron Tower to Sushi Samba.  Not know what to expect and no menu in the lobby, we headed up for lunch.  Well, when we got there, there was a terrific view of London – complete with the Gherkin – so Soren was in heaven. 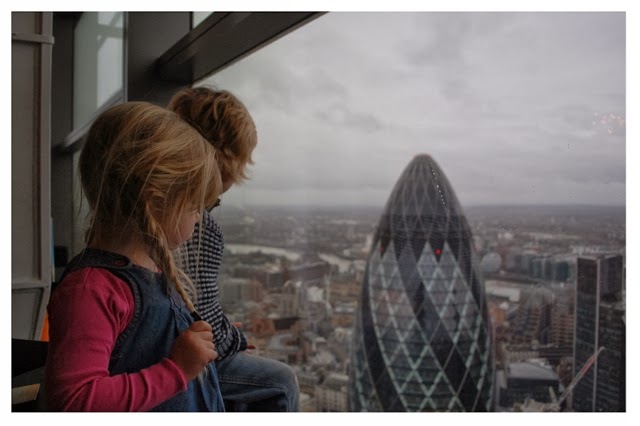 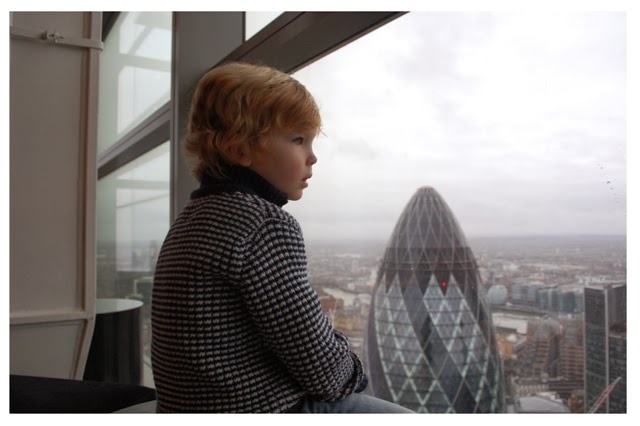 After having checking our coats in the cloak room and being seated, we knew we were out of place.  Clearly not the family-friendly place I thought it would be. More like business luncheons with fat expense budgets… we had a lovely few items but got out as soon as we could.   Later I learned they have locations in Miami, NYC, Las Vegas, etc.  ha ha.   Check out their menu – some items sounded so great – Japanese meets Brazil meets Peru.   If you need a nice place for dinner, to see and be seen, this is the place.   Probably find Madonna, Bono and other famous faces.    Not the best choice for our family.

The kids particularly loved the elevator ride up and down! 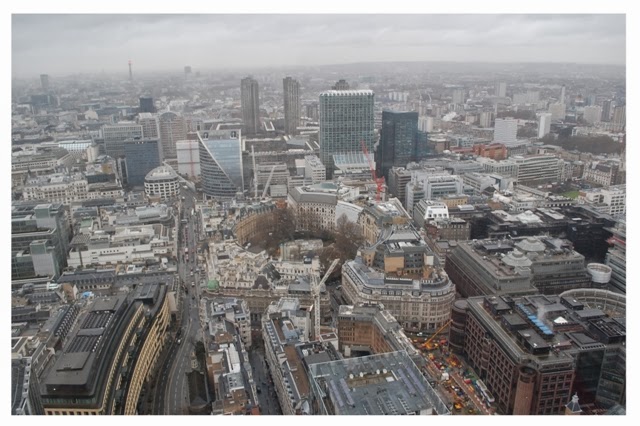 That was it a “quick trip” into London around 7 at night, one night there & back on the 7:30 pm train the next night. As with so many giant cities like NYC & London – nice to visit but so nice to get out and back to our no traffic, quiet lifestyle here in North Norfolk!

I am an American now living in the Netherlands. I enjoy snapping photos and blogging about our family’s journey since we moved abroad nearly 8 years ago. We moved from Boston to the "big skies" of coastal North Norfolk, UK. Then onto Dublin, Ireland, and now we're here in the Netherlands. When I started my blog, it was a way to capture memories of the kids. THEIR love of mayonnaise, my love of photography, DIY, crafting, Pinterest creations, sea glass hunting, exploring & enjoying life with our two amazing kids - all while trying to remain sane. Please note that content, photographs, and images on this site are my own unless otherwise stated.  Pretty please do not repost without my permission. Questions?  Comments?  Ideas?  Winning lottery tickets or riches you'd like to share? Please contact me ;)