During our recent Easter trip to Germany to visit Irrland – Europe’s biggest adventure farm oasis, we stopped by two different villages in Germany, Kevelaer & Xanten – both were very cute, worth visiting and easy day trip from the Netherlands. 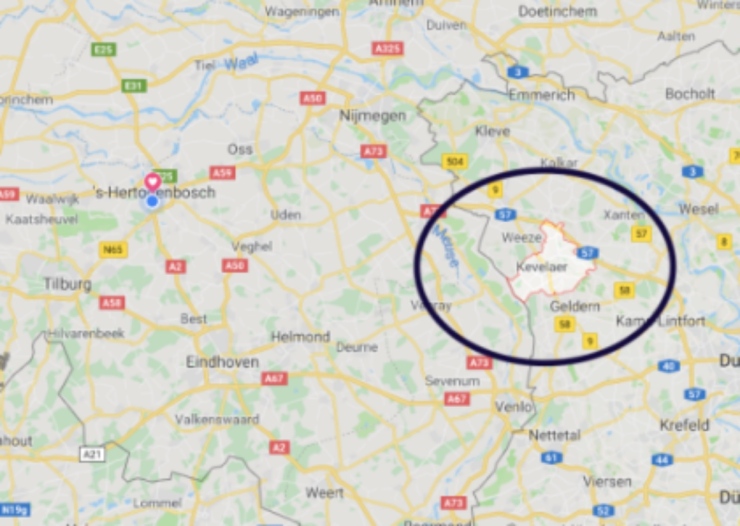 Kevelaer is a town in the district of Kleve, in North Rhine-Westphalia in Germany. It is the largest Catholic pilgrimage location within north-western Europe.  As you walk through the town, you cannot help but notice all the religious shops.  In fact, more than 1 million pilgrims, mostly from Germany and the Netherlands, visit Kevelaer every year to honour the Virgin Mary.  The large pilgrimage church, Stations of the Cross and numerous chapels, including the Chapel of Grace, are the major points of interest for Christians visiting Kevelaer.  If interested in finding out more visit here. 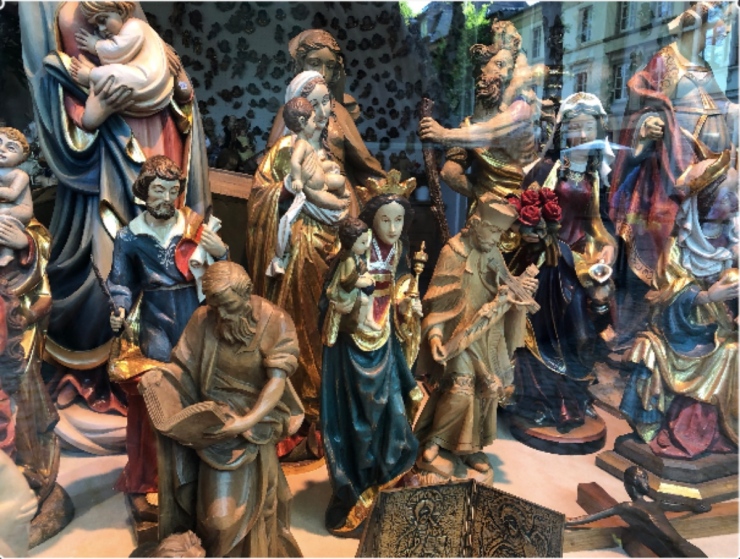 For 375 years, Christians looking for hope have sought out an image of the Mother of God: the Madonna in the small Baroque chapel on Kapellenplatz (Chapel Square) at the heart of Kevelaer.  Click on that link above to see a live webcam feed.  This has transformed the tiny town in the Lower Rhine region into one of the most important Marian shrines in Germany, and made it a meeting place for prayer and silent conversation with God.

There was a mass going on so I didn’t get to pop my head inside but I did take some photos outside. 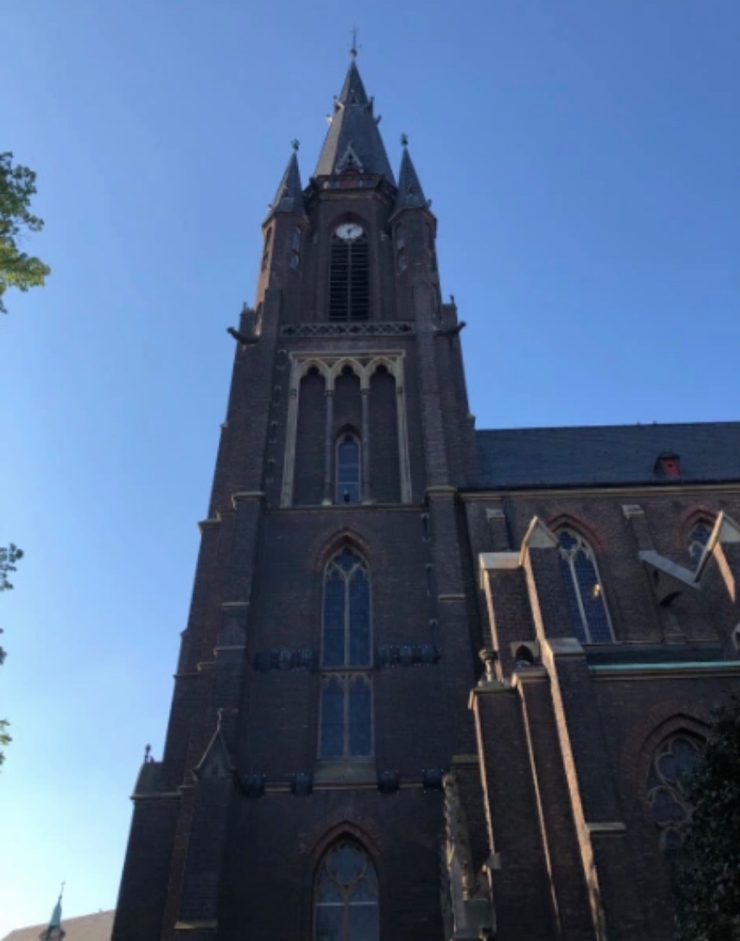 We walked around a bit where I took some photos of the lovely buildings. (It is here my American side really comes out.  I really love the various buildings and the fine details, the windows, the colors even the choice of fonts.  While many European friends don’t even notice or care about them like I do).  Oh yeah, we did enjoy a beer on a sunny terrace before heading having a pizza for dinner and heading back to Schloss Wissen for the night. 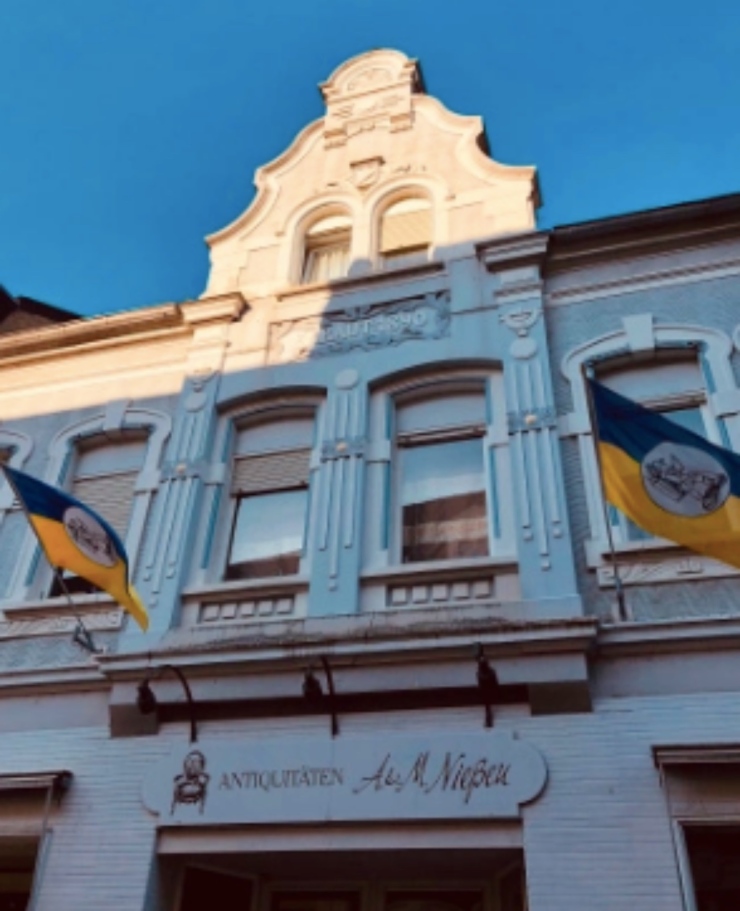 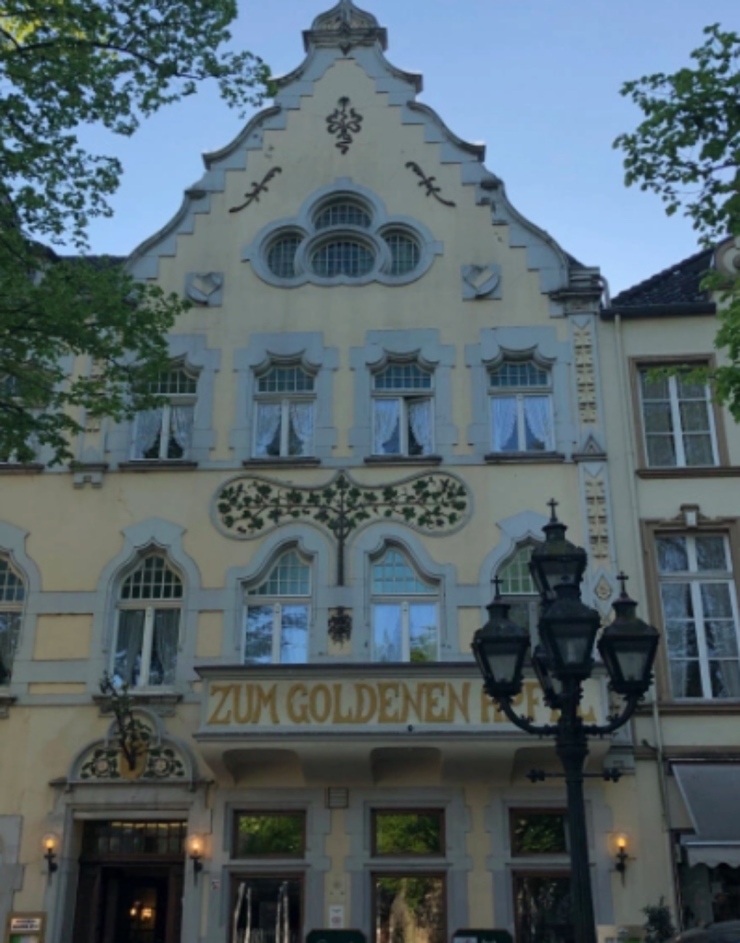 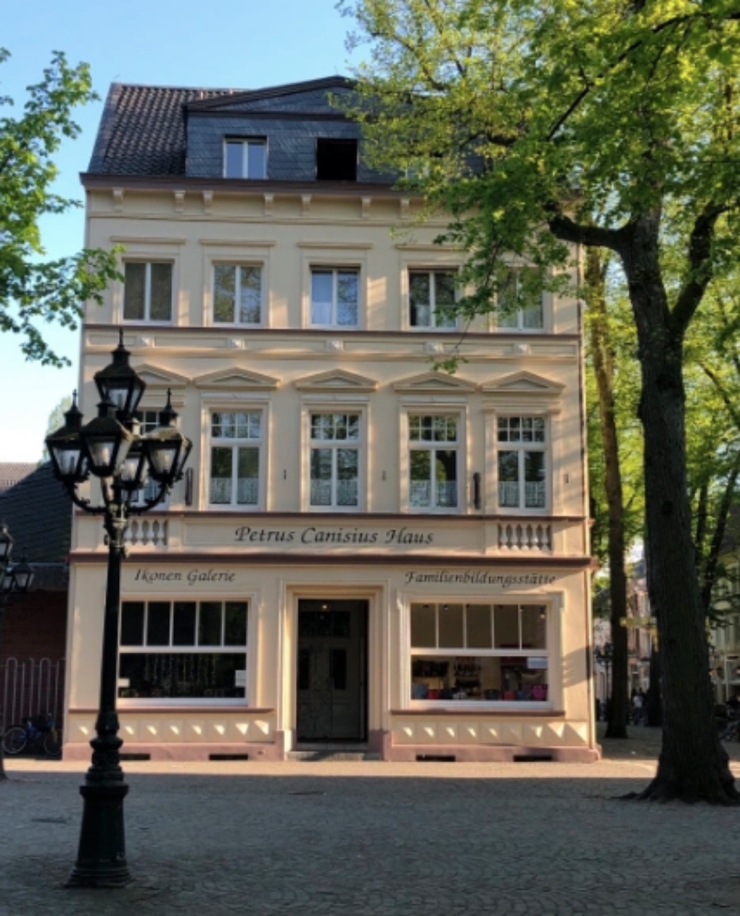 Old town of Xanten, Germany was the second place worth mentioning.  Located a bit further west, it is still not that far from the border of the Netherlands – so an easy day trip.

Xanten is a town in the state of North Rhine-Westphalia, Germany. It is located in the district of Wesel.  Xanten is known for the Archaeological Park, one of the largest archaeological open air museums in the world, built at the site of the Roman settlements Colonia Ulpia Traiana.

We first went there on Monday morning to find a place for breakfast and ended up in Cafe Moll & Dom and had a yummy breakfast before walking around the town a bit.   No we didn’t get a cake for breakfast but they were huge and looked AMAZING!!

We started to walk up by St. Viktor Dom and followed the footprints on the ground…  (It also had a mass going on – as it was Second Easter day – otherwise I would have looked inside – the photos from google are very impressive) 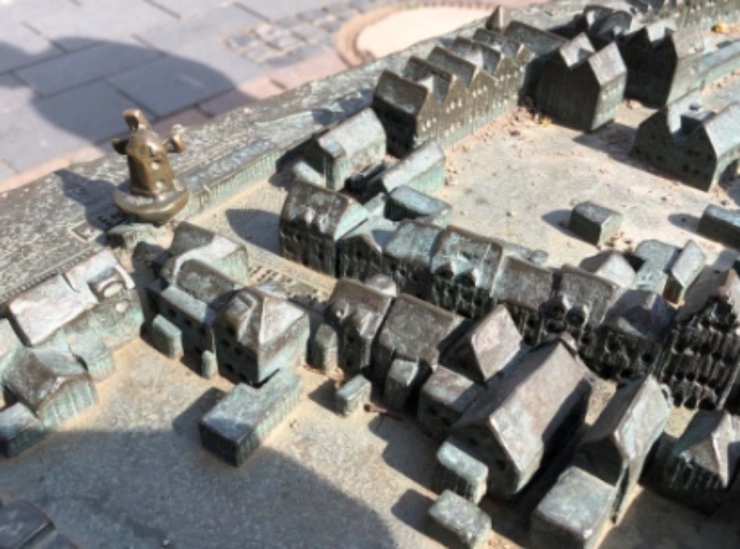 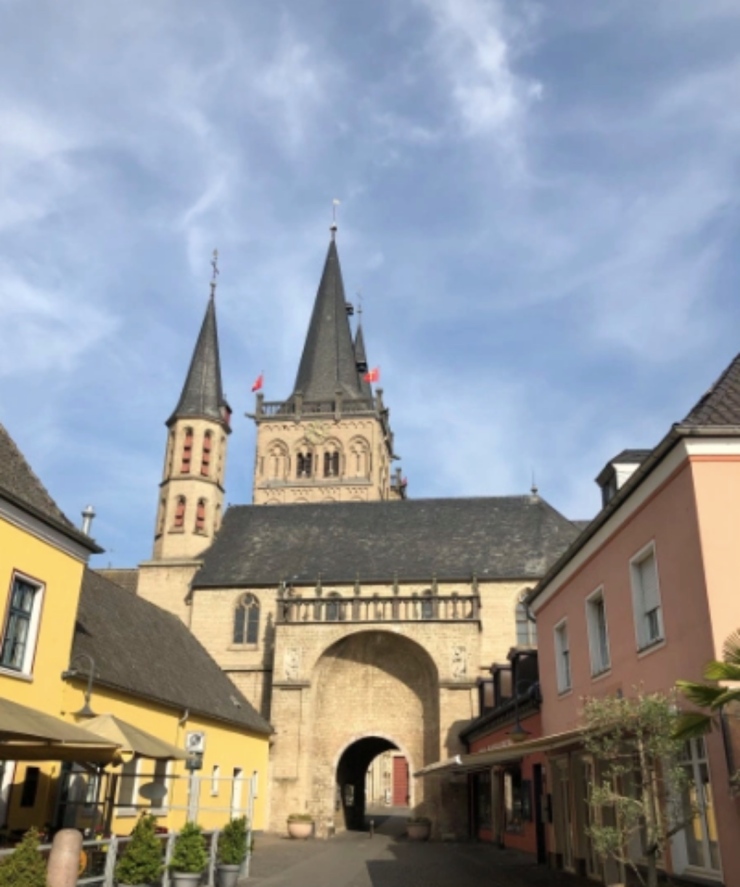 Maebh and I walked over to the large windmill we saw from the car on the way in. We didn’t know that until after that it is Kriemhildmühle – an actual working windmill that allows you to go right into the works.  After you can get an excellent cup of coffee and a nice baked treat that’s made from grain that’s ground right there in the mill itself!!   Next time for sure!! 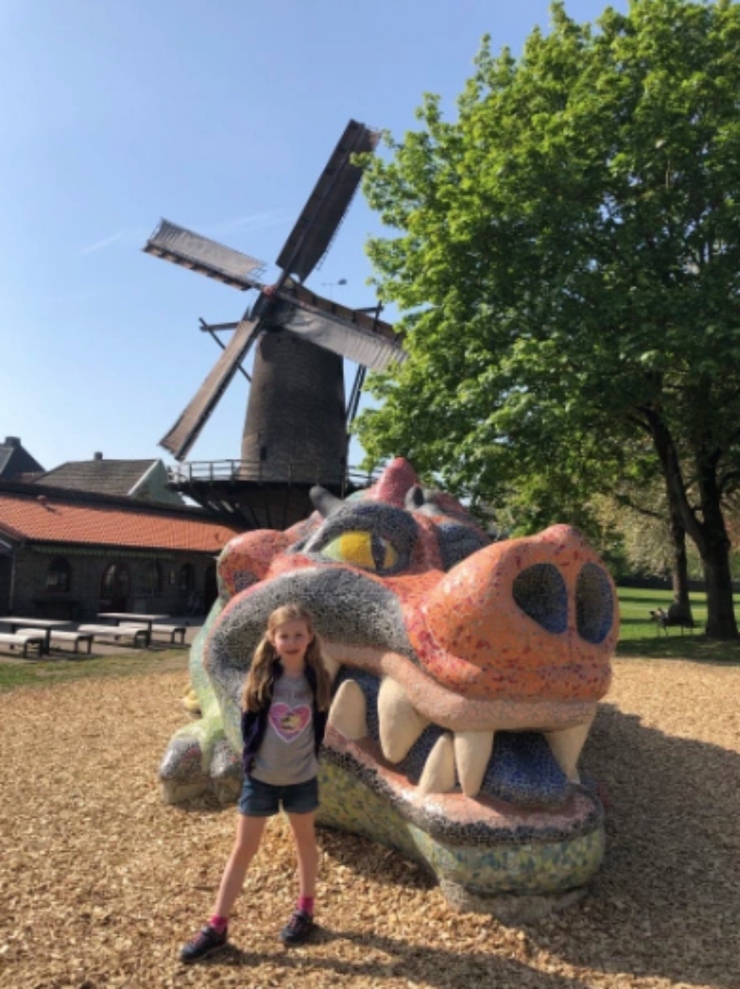 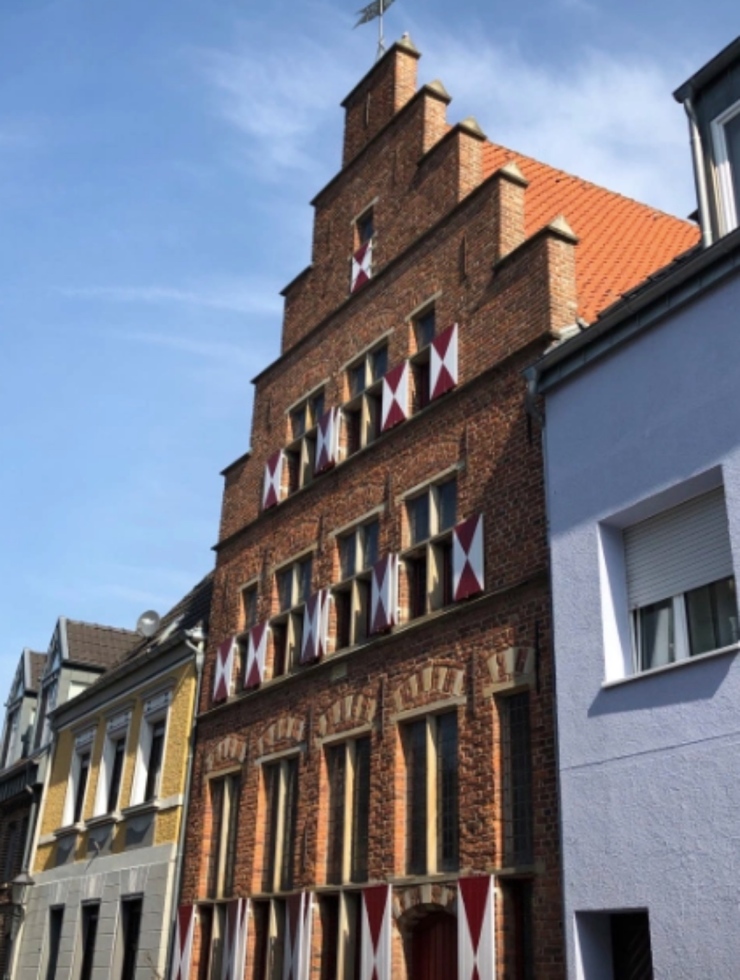 Both kids were tired, everyone was a bit nippy with each other [I didn’t sleep at all the night before thanks to those f’ng bells 🙂 ] and at this point no one wanted to visit the archaeological open air museum,.  Instead we ended up just driving home.  We’ll definitely go back another time as it’s not far from us at all.

I love visiting these villages in Germany.  Of course, visiting them during Christmas season is great too as they have the Christmas Market (Xanten is supposed to have a nice one) and so much atmosphere, but living so close by in the Netherlands, I hope to explore Germany more this summer.   I really want to visit Monschau next and spend a few nights.  But new rule – I’m now going to be sure to confirm my hotel & room is not opposite a clock tower or church – oh the bells 🙂