We all know the Dutch are world-famous for many things and one being flood and coastal risk management.  With a lot of the country sitting below sea level you understand why.  They drained water through a system of polders, canals, and windmill-driven pumps… with record rainfall and climate change, they are preparing for the future.  Schiphol is 8 feet below sea level and the lowest part is in Nieuwekerk aan den Ijssel not so far from Gouda. 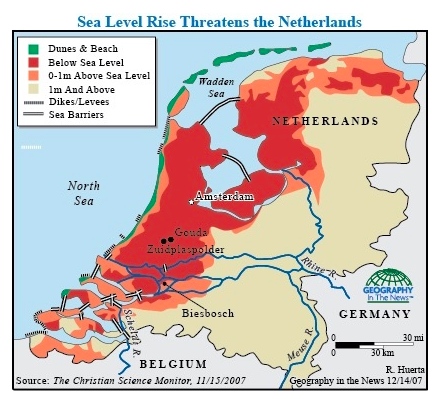 The Netherlands works with what is called “dijkringen” (dyke rings).  If a dike breaks, only a restricted area – a so-called “dike ring” – would be flooded.  Dijkring 13 and 14 (the 2 provinces South and North Holland with Amsterdam and Rotterdam in it) and are protected on a level of a flood risk of 1 in every 10.000 years (with the current water level).   However, other “dijkringen” in the Netherlands have a much higher risk to be flooded – say 1 in every 1,000.    They calculate how many people live inside an area, how much industry is involved…how important is the land… and they connect a risk factor to it.

On February 1, 1953, there was a devastating flood in the Netherlands as a result of a spring tide and a strong Northwesterly storm with the force of a hurricane caused a storm tide.   The water level was considerably higher than normal and the combination of the strong wind and the storm tide meant that that the water defense system couldn’t hold it anymore and the dykes broke at multiple locations.  Sadly 1,835 people were killed, 70,000 more were displaced, and caused damages worth 1 billion Dutch guilders.

CREATION OF THE DELTA WORKS

The Dutch government made it a mission to never allow it to happen again and created the Delta Commission.  https://english.deltacommissaris.nl/  This commission consisted of water experts who had to create a plan to make the Netherlands safe against the water.  As a result, they came up with the Deltaworks Project consisting of 13 ambitious projects designed to protect the Netherlands from flooding from the North Sea building a series of dams, sluices, locks, dykes, levees, and storm surge barriers. The original plans for the Delta Works did not include the Maeslantkering barrier because the authorities wanted to keep the ports of Rotterdam and Antwerp accessible. However, when it was found that the dykes that were originally planned were insufficient to protect the population and the vital economic region, it was decided to build a moveable storm surge barrier.  This is a great website from the Watersnoodmuseum outlining all the various Delta Works projects.

On Saturday, we visited the Maeslantkering – a movable storm surge barrier spanning the New Waterway and allows the port of Rotterdam to be shut off during a major storm.

Before you read this part, I suggest you first go here and see the small animated video about the Maeslantkering [‘Maes’ = the river Maas; ‘lant = land and ‘kering’ means ‘barrier’]

The two moving arms as long as the Eiffel Tower, and each one weighs twice as much pivot with the help of the largest steel ball-joint in the world!  When a storm surge of 3 meters above normal sea level is expected, the barrier will be closed automatically. Incoming and outgoing ships are warned four hours before closing and after two hours the traffic at the Nieuwe Waterweg is stopped altogether. The dry docks that contain the gates are flooded half an hour before closing and the gates start to float. Two so-called ‘locomobiles’ (red things in the photos) move the gates towards each other. When they approach each other, water is let inside the hollows of the gates, and they sink down to the bottom of the waterway.   Imagine the power this storm barrier must resist when an enormous pressure of 35,000 tonnes of water pushes on each of the doors when the barrier is closed (well technically they are not 100% closed – there is an 80 cm gap still.  When operated they take half an hour to swing together over the river and then two hours to sink to the bottom.

Here is a time-lapsed video on Youtube where you can watch it during a testing– as you’ll see the video is over an hour-long, even on time-lapse, but you can fast forward it.

An interesting factor is that a computer system decides when to close the barrier, and closes when water levels reach 3m above normal levels.  Therefore, the closures are triggered automatically to prevent emotions/politics from interfering in its function.  It is expected to result in a closure roughly once every 10 years.  With 50 years of sea level rise, this will increase to once every 5 years.  So far, the barrier has been closed due to storm surge once in 2007.  Though I also read on January 3, 2018, it was closed due to a major storm but if I understood her explanation the water was not that high, but they took advantage of the storm and closed the structure.

They do however do testing – so once a year (typically the third week in September) they do a test by closing the gates in the afternoon and leaving them closed for a few hours.    Due to Corona, not sure what they are going to do this year, but going to keep an eye out on their website.

As you see here in the photos, during the summer, the docks are dry so they can make repairs.  Come the autumn they add water again, allowing the gates to be closed much faster should it be required in bad weather.  It is also painted white so it doesn’t expand as much in the hot sun. 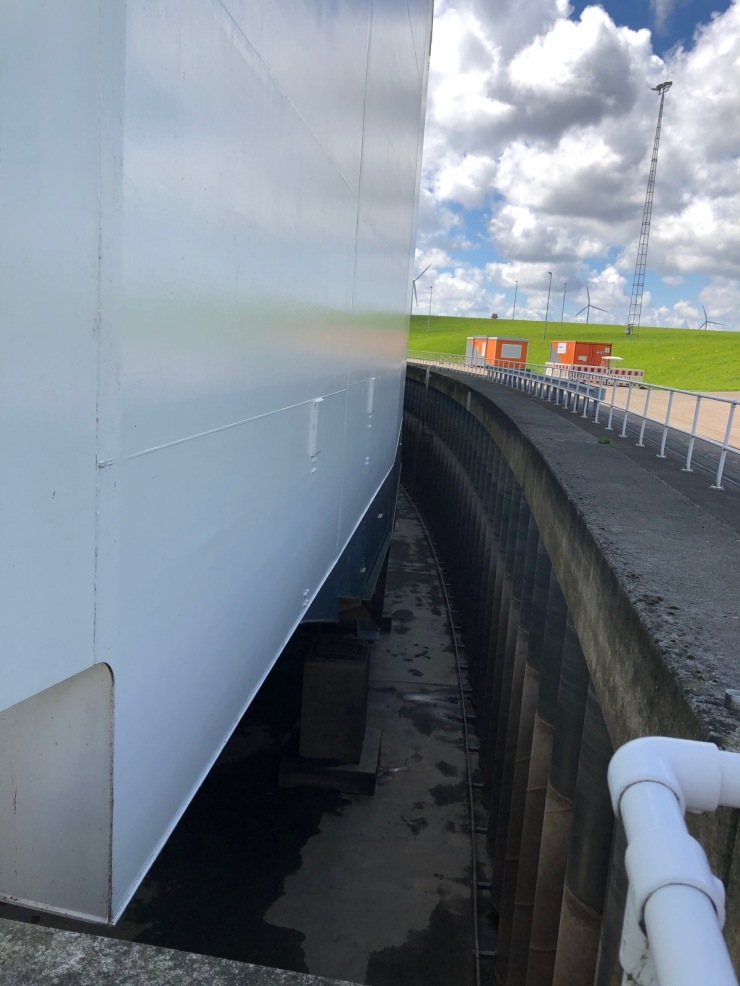 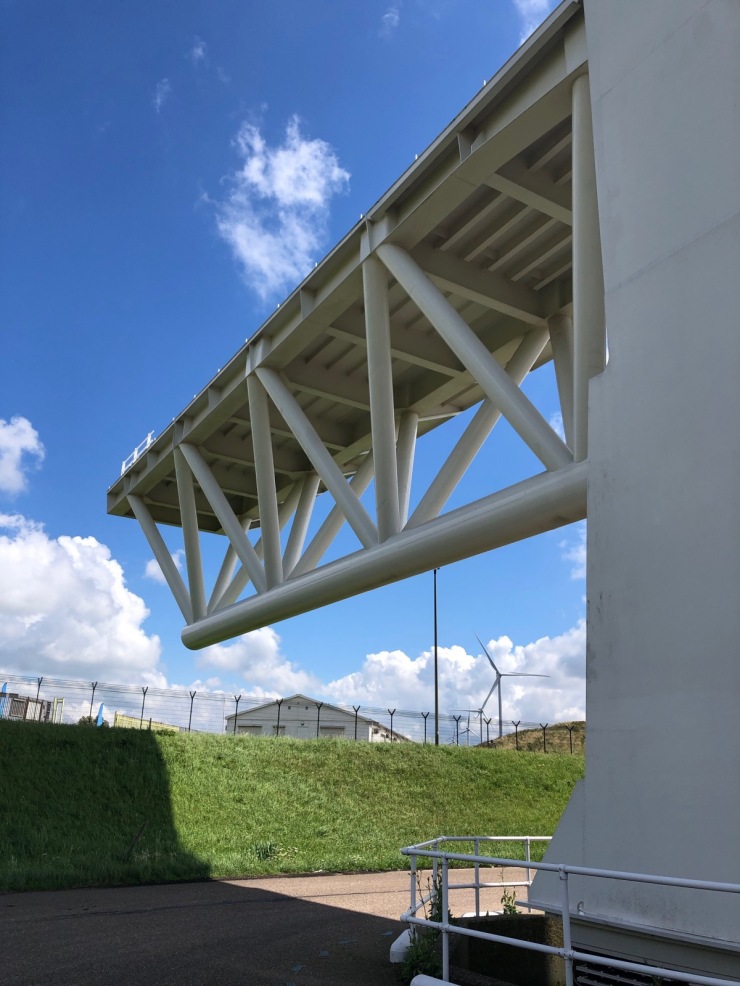 Outside are some kids play areas that didn’t seem open possibly due to corona and a small kiosk serving drinks outside and a cafe inside.   There are some steps up to a hill where you can get a great view of the waterway and the massive structure.

Guided tours are possible in the weekend although reservation is required – and can easily be done online. Guided group tours of around 1.5 hours and are available in Dutch, English or German. These tours also include the site of the storm surge barrier outside the Keringhuis – the small museum is hands-on exhibits – entirely in Dutch.

After our English tour, our guide put on two movies in English.  She normally doesn’t show one as it was quite “technical” but as some of the people on our tour were very interested in seeing it she put it on.

While we’ve driven over the fascinating 3 kilometers long Oosterscheldekering – the longest component of the Delta Works, we have never stopped at the Delta Experience so that is also on my wish list.   Also nearby is the Deltapark Neeltje Jans which I’m sure would be HOURS of fun with the kids.

Of course, visiting is not a possibility for many so you can also do virtual tours. The virtual tours combine both ground photos and aerial photos – a combination that is unique in the World! The aerial photos are made by hanging a camera from underneath a large kite. These so-called ‘kite-shots’ give you the freedom to hover over the DeltaWorks. By clicking on one of many “hot spots” you can zoom in on places that are normally closed for the general public and not even an option to enter like underneath!

I remember taking a few photos when going over this loooonnnngggg bridge but I don’t seem to have them anymore.    I also remember so many cycling over it and thinking that could be fun (on a sunny not too windy day!)

If you find yourself in the area, it’s worth a visit and tour to witness this giant technological marvels.  If not, well click on the links above and be in awe.