We took the kids to the Deepdale Outdoor & Wildlife Festival last year,  where they both held a barn owl, Soren climbed the rock wall and both Soren & Nils had a lesson on how to use a bow & arrow.  So this year, we thought we’d head back for a look.

Unlike the beautiful dry weather last year, it was a bit windy with periods of showers.  Luckily the time we were walking around it was dry and enjoyable.   While they had many of the same exhibitors [mostly outdoor related places] like The Canoe Man, National Trust, Pensthorpe, Girl Guiding, they had some new stuff.

Soren first took another turn on the rock climbing wall, but could tell he was struggling half way up.   He is sensitive to not being able to complete things like this so I didn’t push him when he said he was done and wanted to get off.  He says it was too difficult and he had to pee, but I am sure it was too hard on him with his recently healed broken arm.  Oh well, on the ride home he said he loved it and was glad he did it. 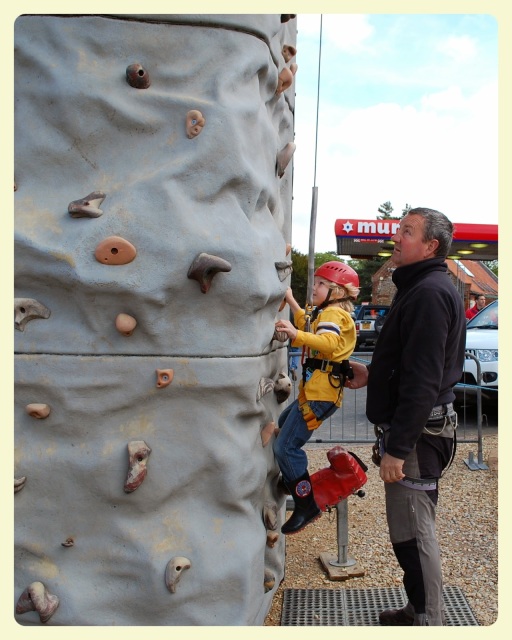 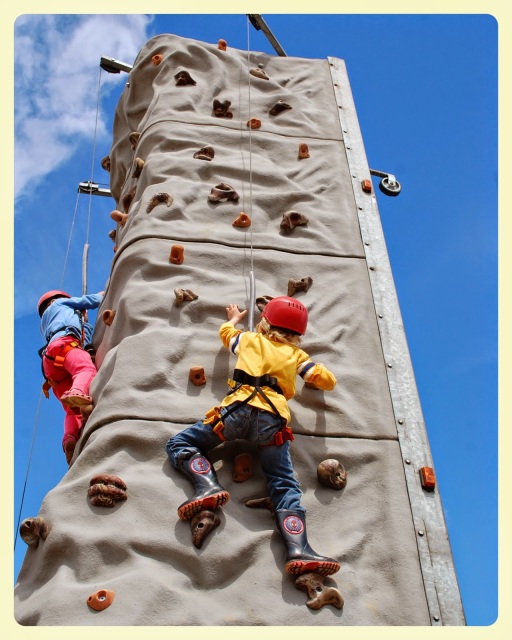 One thing for certain is that Soren going up inspired Maebh to have a turn.  The guy originally asked if she were two (?!) or three. LOL after we said four, he agreed to let her have a turn, if we stayed  close.  So he suited her up in her harness and she was off for a few attempts with his help and then Nils’. It was fun and she was so confident after that she did it!

The kids both did a tombola and won junky prizes, but it was for a good cause so we did it.  And then at the Beach Hut Charm shop, they both had a go with the Lucky Dip where they both “won” lucky charms. 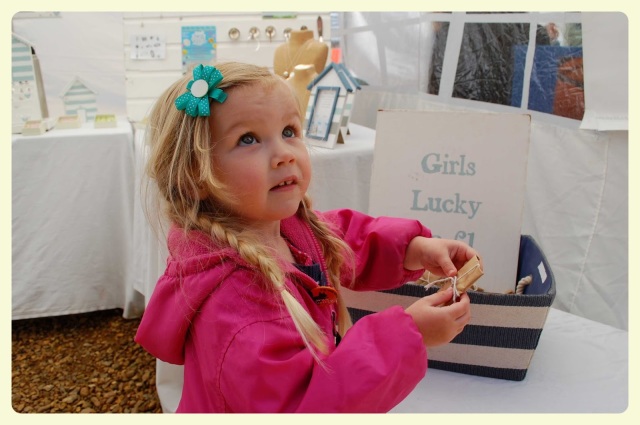 This year the Bow & Arrow guy was not there, nor were the Owls, so they were a little disappointed with that part.

We then headed up the road in search for some lunch at a pub and decided to go to the Jolly Sailors in Brancaster Staithe.  We have never been there before but heard it was very child-friendly. Inside was surprising good – open with farm tables and large windows overlooking the play area, which was a big hit with the kids.  They only had a few minutes as the skies opened and poured rain.   The food was good too – I had a falafel burger with mushrooms and hallumi cheese.  Next time, hopefully it will be dry enough to sit outside at one of the many picnic tables, so we can enjoy what we love so much about pubs in the UK – a couple beers in the sun while the kids play in the play area.

They are having their 5th annual Norfolk Ale & Music Festival during the weekend I turn 40!  Perhaps we can head over for a couple drinks and lunch – as it’s free to enter in the garden marquee.  Says all is welcome, but not sure if it’s child-friendly during the day – probably.